NEJM Evidence, a New England Journal of Medicine digital publication, asked me to write an article about a recent study that compared crosswords and brain games in boosting the brain power of older adults.

• READ THE FULL ARTICLE HERE (including a mini puzzle)

After World War II, BMW 327 coupes and convertibles started rolling off the assembly line, but they weren’t being made by BMW.

Just in time for the new year, in beautiful black and white!

In July of 1715, a fleet of 11 Spanish ships and one French frigate set sail for Spain, overloaded with passengers, goods, livestock — and tons of silver, gold and other riches. Less than 400 miles out of the port of Havana, a raging hurricane hit the eastern coast of Florida, sending all but the French ship to the bottom.

Read/download a PDF of the full article: CLICK HERE

An 8-page article about the last small commercial pineapple farm in the continental U.S., plus the history of pineapples in Florida and around the world. CLICK HERE to read (from the June 2021 issue of Vero Beach Magazine).

This year’s calendar focuses on an issue from the past year (hint: virus). But for the first time ever, you get three choices: a looking-back version, a looking-forward version, or  — maybe you’ve had enough of all this — neither!

Read/download a four-page PDF of an article I wrote and photographed for the May issue of Vero Beach Magazine: [CLICK HERE]

Kids draw what they know — themselves, their family, maybe a house with the sun shining above it. When it comes to drawing people, boys mostly draw boys and girls mostly draw girls. That goes for race as well. There are exceptions, of course, but the basic idea is that children’s drawings reflect who they are and the world around them.

When I became a professional illustrator, I got a crash course in moving beyond that. It came in the mid-to-late 1980s, when I started getting a lot of work drawing illustrations for grade school textbooks.

Right around that time, the major publishers had developed a new editorial approach. It required the content of their books to include a broad mix of people — all races, sexes, body types, hair styles, ages, physical abilities, and so on. Also, professional stereotypes were out the window. A black man could be a professor, a Hispanic woman could be a doctor, a white man could be a nurse. The goal: to have every kid represented in the books and to present any profession as a possibility to anyone.

There weren’t quotas. Each illustrator just had to remember to mix it up. If you hadn’t drawn an American Indian girl in a while, draw one. About the only rule was to avoid exaggerated features than reinforced racial stereotypes. On the flip side, you didn’t want to draw the same face over and over, just coloring it a different shade of brown or peach.

Work would be assigned in batches, like 20, 50, or 100 illustrations at a time. The repetitiveness of the work made that “mix-it-up mindset” stick, and it crossed over into my other work. Illustration assignments outside of textbooks wouldn’t often specify race or sex. So I consciously varied it on my own.

I remember one gratifying moment about 10 years later, when the approach paid off. I was talking to a high school art class about being an illustrator, and I’d brought along six of my illustrated maze books to show as examples.

At the end of my talk, a girl came up to me and asked, “I bet you don’t draw any women characters?” It was the kind of “gotcha” moment I’d heard of, because a lot of media at the time wasn’t very inclusive. But she didn’t get the answer she expected.

Thanks to the experience of working for the textbook publishers, I wasn’t guilty of what she expected. And I’d like to think it offered that girl a ray of hope that she wasn’t always going to be ignored as a woman or as an African-American. I don’t really know because she didn’t say another word. I got the feeling she’d asked that question before, but it was the first time she’d gotten that response.

The fact is, we’re a very diverse country. It’s nice when we can accept and embrace that — and not just in the media. It’s even more important in our personal interactions and in public forums, because … we’re all here bobbing about in the same boat.

Tens of people look forward to my mouse calendar each year. If you’re here to download the 2020 installment, count yourself among the discerning few.

As with last year’s effort, I aimed to keep the rodent infestation from getting out of hand (it takes less time to draw). Hence, the mouse count is below my 30-something-year average … although with a count of 22, it doubles last year’s puny total!

Without further ado, here are the PDFs of this year’s mousterpiece: 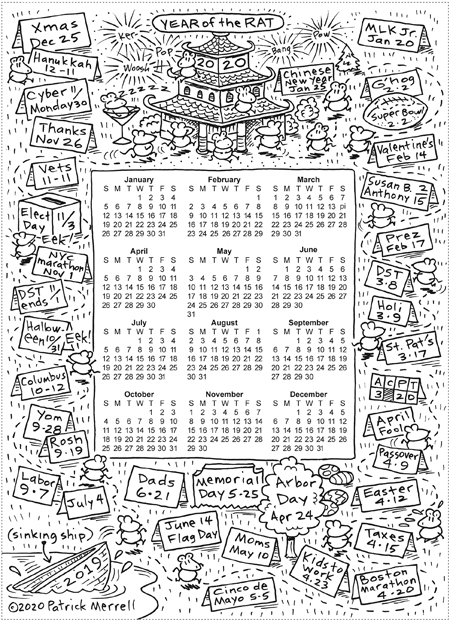 The mouse calendar tradition continues, this year setting a record for the fewest number of mice ever: 11. That’s not even one mouse per month.

Feel free to download and print this useful item in either refrigerator and bread box size. As always, it’s color-free to spare your printer. 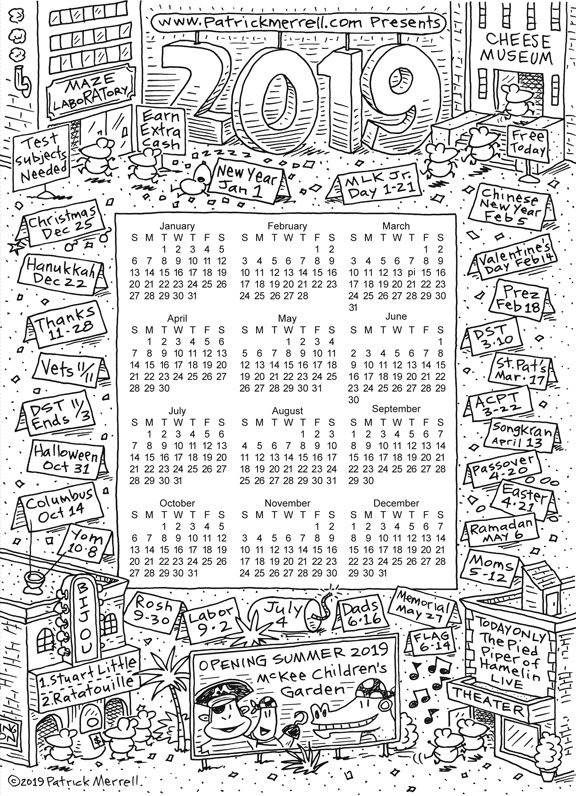 Check out Patrick Merrell’s new website, ORTS, a collection of new, never-used, and repurposed material from his 38 years as a freelance illustrator, graphic designer, writer, and puzzlemaker.

You’ll find a new post every day Monday through Friday, plus interesting tidbits in the sidebar column, Orts Shorts.

230. A Piece of Cake Crosswords

Patrick Blindauer, fellow Patrick and crossword constructor, is offering up a great new Kickstarter project. Watch his video and read all the details HERE. But hurry — there are only a few days left to make it happen!

Back by scattered demand — the 20-somethingth annual mouse calendar, this year performing ZEP in the Curse of the Evil Dr. Sumac Who Lives Next Door (follow along with the book!):