In this week’s People magazine, I’ve got a crossword puzzle with a “star of Everest” as its theme. I’ll have additional puzzles appearing every three weeks.

In the October issue of MAD magazine, I’ve got a Donald Trump poem (a sound bite-friendly four lines long). I also put together many of the articles, as part of a summer stint working there, and managed to sneak one of my mice onto a page. Can you find it?

The Thrill of Victory and the Agony of Almost Victory

The scene: the onstage battle at the American Crossword Puzzle Tournament between five-times-in-a-row winners Dan Feyer and Tyler Hinman. Howard Barkin added a wild card to the mix, making his fifth trip to the big boards (once as a C finalist).

Tyler radiated a renewed hunger to take back the title, racing to fill in letters. In contrast, Dan solved with methodical speed. In the end, the result was the same. Within less than eight minutes, they both had just a few letters to go. And I honestly wondered if we’d see the first tie in tournament history. END_OF_DOCUMENT_TOKEN_TO_BE_REPLACED

An action-packed tale of adventure, intrigue, and gadgetry for kids; a baffling, multi-step puzzle for adults hidden in the art.

In a thud of inspiration about 25 years ago, I wrote and sketched up a book called Zep (in the Curse of the Evil Dr. Sumac Who Lives Next Door). The book’s 130 pages were held together using a single binder ring. When my daughter came along, I started reading Zep to her, and it soon became one of her favorite stories.

For years I’ve dreamed of turning Zep into a real book, and the time has finally come. But I’m looking to do something I’ve never done before — self-publish.

You can help in that effort by pre-ordering the book on Kickstarter (you’ll also get some insider extras). There are additional levels of involvement, such as buying yourself a piece of original art from the book, that will help in funding the project. EVERYTHING IS EXPLAINED HERE.

A trio of snapshots from the American Crossword Puzzle Championship. I took blurred photos, then made adjustments in Photoshop, including the addition of a watercolor effect (it shows up more when the photos are enlarged). The last shot is a rare photo of Don Christensen, the man who takes pictures of everyone else over the weekend. Don is about to capture Will Shortz and Mike Shenk, the final-puzzle constructor, for posterity … and hopefully not fall off the stage.

Click on the titles to enlarge: 1. Easels, 2. Winners, 3. Invisible Man 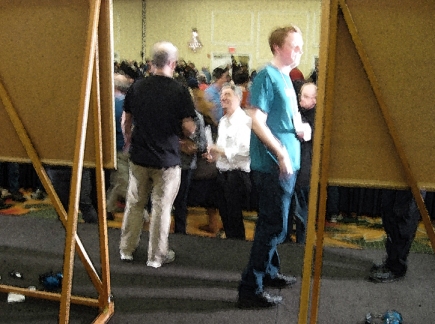 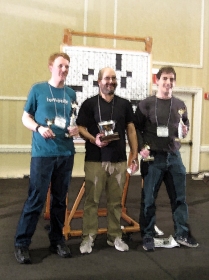 By chance, about five years ago, I heard that Will Shortz would be hosting a small get-together at his house for a few puzzle friends. That didn’t involve me, but an annual crossword tournament Will holds in his hometown the week before — that would. The event is always followed by a trek of the puzzling faithful to stately Shortz manor for snacks and drinks and hobnobbing.

After the tournament, while clogs of puzzlers were clustered in Will’s kitchen, dining room, and living room, I planted a small puzzle hunt around the house. There were three clues. Each was a 4-line poem on a small piece of paper giving a hint as to the location of the next clue.

On the day of Will’s party, I sent him an email explaining what I’d done. At the end of the email was another 4-line poem to start the hunt.

The first clue was hidden in a vase on his mantel, not far from a Rotten Tomatoes award for the best-reviewed documentary of the year, Wordplay. Where was the second clue? I’m not remembering. But the third one was inside a fake can of Coca-Cola in a kitchen cupboard otherwise filled with cans of Campbell’s Chunky soup. Its message led to the “prize” I’d squirreled away in the back of his freezer, a small container of mustache antifreeze for use during the upcoming winter.

I’ve never asked if he’s used it, but I suspect not.

Here’s a “fun” puzzle, adapted from one that appears in iFlush: Hurtling thru History. Click on the image to download a PDF.

Here’s the cover we didn’t use. To find out the actual title, click on the cover.

Inside you’ll find a dozen of our patented Top Ten Jumbo Puzzlers, plus a quintet of Top Ten Fun Fact pages covering today’s sizzlingest celebrities. Also, back by popular demand, seven types of puzzles and a six-page treasure trove of trivia.

• An entire section of puzzles for each Hunger Games book and another for the movies.
• Fascinating Hunger Games facts at every turn.
• 8 types of word search puzzles: regular, jumbo, plot search, one-word, clue, quote, trivia, and THG.

Five factoids from the book:
• Bathsheba Everdene, the lead character in Thomas Hardy’s Far From the Madding Crowd, inspired Katniss’s last name.
• WINNERS’ DESPOT is an anagram of PRESIDENT SNOW.
• In a 2012 People magazine poll, the “which hunk do you like best?” voting favored Peeta over Gale, 73 percent to 27 percent.
• Suzanne Collins found occasional relief from the realities of working on The Hunger Games by writing episodes of Wow! Wow! Wubbzy!, a preschool Nick Jr. show.
• Other fictional Buttercups: the princess in The Princess Bride, a unicorn in Toy Story 3, and a tomboy Powerpuff Girl.

iFlush: Hurtling thru History is now officially available (ages 8 and up; 96 pages).

PLUS 40 unique puzzles, one accompanying each article. 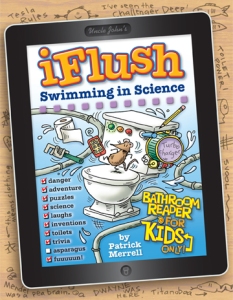 The first iFlush book, Swimming in Science, is available now — ahead of schedule.

After all these years, it’s my first-ever hardcover book, so I’m all in a tizzy. The publisher has even splurged on embossing and spot gloss for the front cover and schmancy endpapers inside.

What’s in it? You can read about the premise by clicking on the book, but I’ll add to that by listing some of the science topics in it:

But, wait, there’s even more! Each article has a related puzzle that’s different and fun and cool. 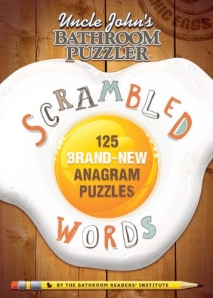 125 Brand-New Anagram Puzzles is now available for your solving pleasure.

The difficulty increases and variations are introduced as you go, including illustrated anagrams.

• Read more about it on Amazon.com

BLAST FROM THE PAST DEPT.: This recent talk of ambigrams dredged up memories of a crossword I put together for Scientific American in 2006. It was written before I dabbled in ambigrams, so I hadn’t thought of it in those terms, but that’s what it is.

Sciam‘s website still has it up [CLICK HERE]. Since the crossword appeared on two pages, the grid (“blank puzzle” is how its described) and clues are on separate PDFs.

TIP: Download the PDFs (using the arrow icon in the upper right) rather than printing directly from the site. When I printed directly, the image didn’t rotate and ended up getting cropped.

What golfer, in different years, has been a runner-up in the Masters Golf Tournament to both Jack Nicklaus and Tiger Woods? Both his first name and last name are bird-related, to varying degrees.