The Thrill of Victory and the Agony of Almost Victory

The scene: the onstage battle at the American Crossword Puzzle Tournament between five-times-in-a-row winners Dan Feyer and Tyler Hinman. Howard Barkin added a wild card to the mix, making his fifth trip to the big boards (once as a C finalist).

Tyler radiated a renewed hunger to take back the title, racing to fill in letters. In contrast, Dan solved with methodical speed. In the end, the result was the same. Within less than eight minutes, they both had just a few letters to go. And I honestly wondered if we’d see the first tie in tournament history. END_OF_DOCUMENT_TOKEN_TO_BE_REPLACED

A trio of snapshots from the American Crossword Puzzle Championship. I took blurred photos, then made adjustments in Photoshop, including the addition of a watercolor effect (it shows up more when the photos are enlarged). The last shot is a rare photo of Don Christensen, the man who takes pictures of everyone else over the weekend. Don is about to capture Will Shortz and Mike Shenk, the final-puzzle constructor, for posterity … and hopefully not fall off the stage.

Click on the titles to enlarge: 1. Easels, 2. Winners, 3. Invisible Man 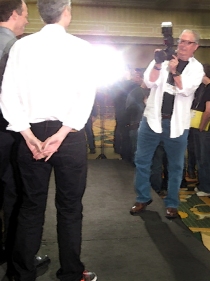 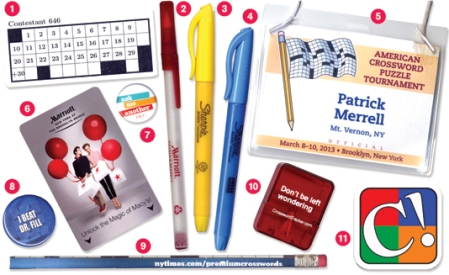 1. Contestant sticker. 2. Marriott pen. 3. The contestants’ most-dreaded pen (used by the judges to mark incorrect answers). 4. No, wait, this is the contestants’ most-dreaded pen (used to mark correct answers when only a few letters have been entered in the grid). 5. Name tag. 6. Marriott room key. 7. Ophira Eisenberg, from NPR’s Ask Me Another, was in the house (and unofficial best-shod attendee). 8. Dr. Fill returned. 9. Freebie pencil from The New York Times. 10. Freebie pencil sharpener from crosswordtracker.com. 11. And wherever you turned, a circle of people were yelling out answers to Peter Gordon’s Celebrity: Get a Clue iPhone app. (Do you know who Uggie is?)

Like to experience the dastardliness of puzzle No. 5 at the American Crossword Puzzle Tournament? Here’s the one I wrote in 2009, resulting in a “crash and burn” for the vast majority of the field (within the 30-minute time limit). Puzzle No. 5 is not a way to make friends.

An interesting tidbit behind this puzzle is that Will Shortz called me the week before the tournament, saying he needed a replacement for the No. 5 he had in hand (not one I’d written). Luckily, I had some ideas around that I could fashion into a 17×17 and picked out a solid one, erring on the side of surefire rather than taking a chance on something wild.

When I e-mailed Will the finished puzzle two days later, one of the theme entries wasn’t working for him. I replaced it, reconstructed and reclued half the puzzle and sent the revision over the next day. After a bit of clue editing and some test solving over the weekend, a nasty No. 5 was ready to foist on the suspecting masses.

If you’d like to try all of this year’s puzzles, there are two ways available. And the price is a bargain at only $20, either way:

The cool part is that your puzzles will be scored so you can see how you stack up against the actual competitors. 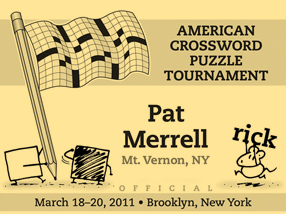 Dan Feyer, this year’s American Crossword Puzzle Tournament champion, isn’t just a whiz at crosswords. It seems just about any type of puzzle yields to his will. On Friday night, he was one of the top finishers in the U.S. vs. U.K. cryptic puzzle contest. On Saturday night, I joined up with him on a four-person team in the “ACPTzing Race,” and he proved his dexterity at the wide assortment of puzzles we were assaulted with (compliments of Greg Pliska and John Chaneski’s devious minds). Alas, despite that advantage, we lagged far behind the winning team. [Update: That winning team included Tyler Hinman, a puzzler you may have heard of.]

A note to those looking to take Dan down in a puzzle contest. If you can find a way to mix in a sudoku puzzle, he’s a mere mortal at those.

Not too much to report from behind the scenes in the judging room. A lot of that is thanks to Matt Ginsberg’s scanning technology, which for the second year has spared us the task of manually counting the wrong letters and words in each grid, a job that numbed our brains in the past. Because of that, Matt is very popular with the judges, although we don’t see a lot of him since he spends countless hours hunkered down in the scoring bunker of the Marriott, tending to the many issues that arise. Two others who work hours on end are Doug Heller, the head judge and webmaster, and Nancy Parsons.

Speaking of Matt Ginsberg, at our Friday night judges’ dinner at Eamonn’s, a nearby Irish pub and restaurant, we got a look at the progress he’s made with his crossword-solving program “Dr. Fill.” It wasn’t quite ready for competing in this year’s tournament, but I heard it finished puzzle No. 1 in well under three minutes with no mistakes, a remarkable feat. A recent trial using last year’s puzzles would have put it in 272nd place for the 2010 tournament.

The great Roz Chast was a delight as this year’s special guest, giving a clever speech on Sunday before handing out the trophies. She’s just as funny in person as she is on the page and even looks a bit like one of the characters she would draw … although not as sketchy, and with all of her coloring well within the lines (she’s also a better dresser). In a demonstration of the high regard in which the tournament holds her, she was one of only a few people (along with Will Shortz and the tournament director Helene Hovanec) to warrant a full-color tournament I.D. badge (those printed cards we wear around our necks all weekend). I got the honor of presenting it to her, but only because I happened to notice it forlornly lying on a table in the hallway. I’m sure it’s already proudly hanging on her studio wall.

The revelations of the Sunday morning talent show for me were Tommy Lee Cook, a blues guitarist and singer from Ft. Myers, Florida, and the dancing, singing, and ukelele-strumming talents of Francis Heaney (who knew!) as he accompanied Lorinne Lampert as an unannounced second banana. All of the other performers, many of whom we’ve enjoyed in the past, were great, but those two were surprising and welcome additions.

Oh, and let’s not forget the constructor David Kwong, who’s also a darn good magician. At the cheese and wine (and celery, beer and vegetable chip) reception after his performance on Friday night, he demonstrated a few cards tricks to Ellen Ripstein and me. I was watching his hands like a hawk and was completely baffled, which is the real fun of watching a magician at work.

Of course, one of the great attractions of the tournament for me is soaking in the camaraderie of the weekend, seeing old friends and fellow constructors, and meeting many new people, including lots of Times solvers. There’s always a large chunk of newcomers each year, and a good smattering introduced themselves, but just as gratifying were the smiles exchanged in passing with many others in the ballroom, hallways, and lobby over the three days. Sure, the competition is the raison d’être, but it’s the friendliness and warmth of the weekend that really puts it over the top.

A huge thanks to Will Shortz for making that magic happen yet once again — I’m still feeling the glow a day later — and to Helene Hovanec who annually tames the many-headed organizational beast, seemingly with ease.

Should other thoughts come to mind later on, I’ll report back, but I think that should more than do it for now.

Other tournament blog reports can be found by clicking HERE (scroll down a bit on that page).